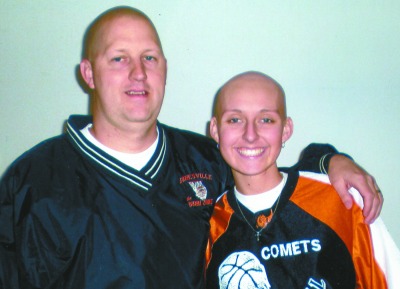 Tom Dunn and former player Emily Hepker, who continues to battle lymphoma cancer, pose for a picture after Dunn shaved his head to show Hepker he cared as she goes through chemotherapy.

Jonesville head girls basketball coach Tom Dunn shaved his head recently, but it wasn’t for any of the conventional reasons.

His team didn’t win a league title, he didn’t lose a bet with his players and it certainly wasn’t because he wanted to look stylish when he wears his muscle shirts at summer practices.

It was because he is a man of his word and he knew Emily Hepker was counting on him.

The 20-year-old played varsity basketball for Dunn for two years before graduating in 2007, but battling for limited playing time was easy compared to what she’s contended with since March 12, 2007.

That’s when she was diagnosed with lymphoma cancer.

Since then she has traveled to the Mayo Clinic in Rochester Minn., almost every month, with medical bills from a single month often exceeding median yearly household incomes of the area.

She has been the girl who always wears a smile on her face despite being extremely ill, she has been an inspiration to everyone she has encountered since receiving the shocking news that her life might never be normal again.

And earlier this spring, when Dunn found out Emily might have to begin chemotherapy treatments he knew he wanted to show his love and support in a very personal way.

Dunn said he promised Hepker’s mother, Jesse, that if Emily ever lost her hair he would go down that road with her.

Dunn lost his brother to esophageal cancer and father to colon cancer so on some level he understood the pain the Hepker family was going through, although he says it is completely different because she is so young and had so much life left to live.

Emily started chemo at the beginning of April and during the second round of treatment she was faced with the reality of losing her locks.

To say the process was mentally and physically agonizing would be an understatement.

“She actually lost two-and-a-half pounds of hair in two days. And actually your hair is very painful when it falls out because it comes out from the root, it doesn’t come out like you and I where you just shed a little,” Jesse Hepker said.

Soon after, the word came down from doctors that it would just be better for Emily to shave her head to alleviate the intense pain, and not long after Dunn stuck to his vow.

The two then had a photo shoot at the Hepker family’s studio to commemorate the occasion and also to feed what Jesse likes to call Emily’s “photoholic” addiction.

“Her mom gave me the heads up here a few months ago that it was coming and then I got a phone call at 11:30 at night saying Emily had lost her hair so I shaved my head the next day. She was one of my players and a great kid and I just wanted to show her in my way that I support her,” Dunn said. “Anything to help her through this whole ordeal because she’s been pricked and poked and her body has been beat up and she just comes out smiling, she’s just a role model for other people of all ages.”

A role model that Dunn has grown close to over the years for a number of reasons.

Dunn said he remembers the summer before Emily was going to be a high school freshman, when he kind of sought her out to become part of the basketball program.

“The first time I saw here was over at a Hillsdale College Shootout, and she was in the stands watching her distant relative from Jonesville, and I told her to go home and get her shoes. She was a freshman, she was scared to death, but she came out and made two baskets in that game, it was great,” he said. “I knew she was going to come to school here, so I thought heck, I had her go home and get her shoes and that’s the first time I met her. She was a deer in the headlights definitely that day.”

He said Emily is actually one of the girl’s he “should’ve played more, but didn’t” and he and Emily still joke about that to this day. Dunn also said Hepker was a key role player in the Comets’ 2007 Big Eight championship run, forcing opponents into tough shots and coming up with important rebounds.

Mom agrees Emily should have maybe seen the court a little more, but she also emphasizes how incredibly important a role Dunn has played in her daughter’s life.

“She has helped him coach some of the little kids team and middle school teams. She babysat for them and athletic wise she didn’t really have a mentor and Tom took her under his wings,” she said. “A person is only as good as their word and when Tom said he was going to shave her head if Emily lost her hair, I knew he would.”

As much as Dunn cleaning off his noggin meant to the Hepkers, what Emily has taught the entire community is so much more valuable according to the head coach.

Dunn said Emily’s journey has taught him to be thankful for his health and family every night he goes to bed and he also believes her struggle has brought out the best of Jonesville’s character.

“(After finding out about her diagnosis) I just remember telling the kids they’ve got to be there for her, because she was going to need all the support she could get. I tell you what, all of our kids here just went above and beyond for her,” he said. “It’s just a great place to be. I’ve been here 40 years, and you always wonder what it would be like somewhere else, but it’s just great here, it’s a real good community with a good school system.”

Jesse Hepker could not agree more, struggling to keep her emotions in check as she talked about all the love and support her family has received.

“Emily and I want people to realize how much we appreciate people more than any words can say. Just to know people support you…this community has supported her from March 12, 2007 on,” she said. “I sometimes think that man, they must be tired of doing all this. We feel like everyone has just gone over, above and beyond. The Udder Side and St. Anthony’s church have done a lot, as have so many people and families. We get cards, donations, everything.”

Community picnics and events have helped raise money for Emily’s treatment, and in less than two weeks another benefit is being held.

Hepker’s four siblings live in the Adrian area and they are hosting a Father’s Day softball benefit at Siena Heights University on June 21.

“It’s so like the dads can hang out with their sons and just enjoy the day playing softball,” Hepker said.

The family also still has an account at National City Bank that people can donate to.

Despite the help and unending, unwavering encouragement, the photo shoot with Dunn is only a small blip of happiness on a sometimes bleak radar.

Hepker has chemotherapy treatments at Mayo Clinic every three weeks, and at this point the treatment is really just to help alleviate some of the pain more than anything else.

The prognosis is not good and Emily reminds her mom that her faith in Christ promises her a better future, but Jesse is far from ready to say goodbye.

“Emily has a lot of faith and knows she’s going somewhere better and I’m not ready for her to go somewhere better. We grieve ourselves, not for the people who are gone,” she said.

In the meantime friends and family will continue to pray and offer their best wishes, while Hepker continues to make an indelible mark on the world.

Dunn for one said he has been blessed to have Emily’s presence in his life.

“The day I’ll get worried is when she doesn’t have a smile on her face. Behind the scenes it may be different, but when she’s in public it’s just unreal,” he said.”It just goes to show you that people think they have it bad and then you wake up and see something like this and you go home at night and say ‘man, I feel pretty lucky.’ That’s the way I look at it.”

I am what you think I am — a journalist. Actually when I was hired at my current job, which by the way is Sports Editor of the Hillsdale Daily News in Hillsdale, Mich., I applied for a position titled "Wordsmith", so at my best I'll call myself a writer attempting to be a wordsmith extraordinaire.
View all posts by rjwalters »
« Heart and head: Coach Dunn shows support for battle-tested former player
Hillsdale College athletics tidbits »