A steady diet of chips is not normally a winning recipe for running and walking, but several race directors in the Citizen Patriot Running/Walking series are aiming to innovate with new electronic chip timing technology in 2011. 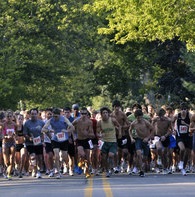 For the first time in series history, runners will have identification bibs with electronic chips embedded, at the Orthopaedic Rehab 8k/5k races Saturday.
When participants cross the pad at the finish line, the chips will register their time and streamline the result-posting process.
“A lot of the bigger races have gone to that chip timing, and our sponsor in particular wanted to be on the cutting edge of technology,” race director Bob Gilmore said. “There’s no pull tags involved and a lot less staff needed at the finish line.”
The race marks the kick-off of an eight-race series schedule that will wrap up Sept. 10 with the Allegiance Race to Health.
Event information

The next race on April 30 is the Family Services and Children’s Aid 5k Run/Walk, which will also feature the new chip technology, followed by the Advance Packaging 5,000 5k Run/Walk on May 13.
A complete schedule of events is available atwww.fitnesscouncil.org.
Orthopaedic Rehab is contracting chip-timing services from Lansing-based Michigan Running Foundation Inc. Proceeds generated from the foundation hosting or timing road races benefit youth track clubs and cross country and track scholarships.
Gilmore said racing fanatics in Jackson County consider the new technology cutting edge, but it doesn’t come without a price.
“I think it’s going to be a matter of how much that additional cost is and how different races can absorb it, either with another sponsor or increasing the entry fees,” he said.
The entry fees for the Orthopaedic Rehab event remain unchanged from 2010.
The new electronic devices are one of many features for the 20th annual run downtown.
“One of the biggest highlights for the runners that we’ve found year after year is we invest money on our end to get high-quality running shirts, so (participants) will get 20th anniversary special edition ones this year,” said Karyn Clow, the business development director for Orthopaedic Rehab Specialists.
The race has also been dubbed the “marrowthon” in the past because portions of registration fees are donated to the American Cancer Society and local charities.
Clow estimates nearly $3,000 was raised last year.
Gilmore said he expects at least three or four other events will utilize the electronic chip timing, while the Hanover-Horton Firecracker Run has an innovation all its own to tout.
“We’ve been talking about how our races have been keeping up with the times, but the Hanover-Horton Firecracker Run is going back and using the old course from the 1970s,” Gilmore said. “So they’re going retro … just something to be different and maybe a little more challenging course.”
As published in the Jackson Citizen Patriot on April 12, 2011

I am what you think I am — a journalist. Actually when I was hired at my current job, which by the way is Sports Editor of the Hillsdale Daily News in Hillsdale, Mich., I applied for a position titled "Wordsmith", so at my best I'll call myself a writer attempting to be a wordsmith extraordinaire.
View all posts by rjwalters »
« >Bringing New York to Jackson for the sake of saving
>Michigan Center School Board approves plans for new roofs at elementary schools »